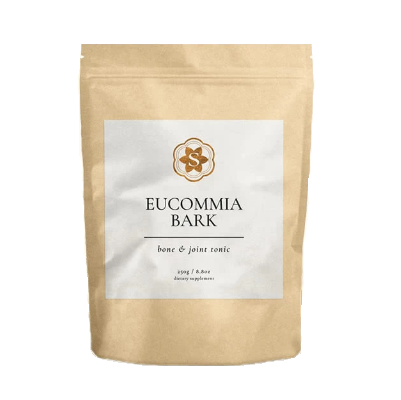 Eucommia bark is a potent kidney Yang nourishing herb used to strengthen and fortify the bones and ligaments. A favourite longevity herb of the ancient Taoist herbalists.

Eucommia bark (Eucommia ulmoides) is an adaptogenic tonic herb known for its ability to replenish the expansive kidney energy that assists the body in generating strength, stamina and power in the body. Eucommia bark is in fact the primary herb in Chinese tonic herbalism for building a strong, sturdy, flexible skeletal structure and is used to help strengthen the bones, ligaments and tendons. It is said that when the kidney Yang is strong, the libido will flourish, and Eucommia bark is the primary herb for restoring and rebuilding kidney Yang. Our Eucommia bark is harvested from its natural home in China’s Changbai Mountains, where it is said the Taoists, thousands of years ago, first learnt about this herb by watching animals with bone injuries seek out the bark to promote accelerated healing.

Start by adding 1/2 teaspoon (approx. 3g) to hot water to make an instant tea (sweeten if desired), or add to smoothies, juices, elixirs, hot chocolates or your favourite recipe for a healthy boost. Serving size may be increased to up to 2 Tbs per day; recommended daily serve is 1 tsp.